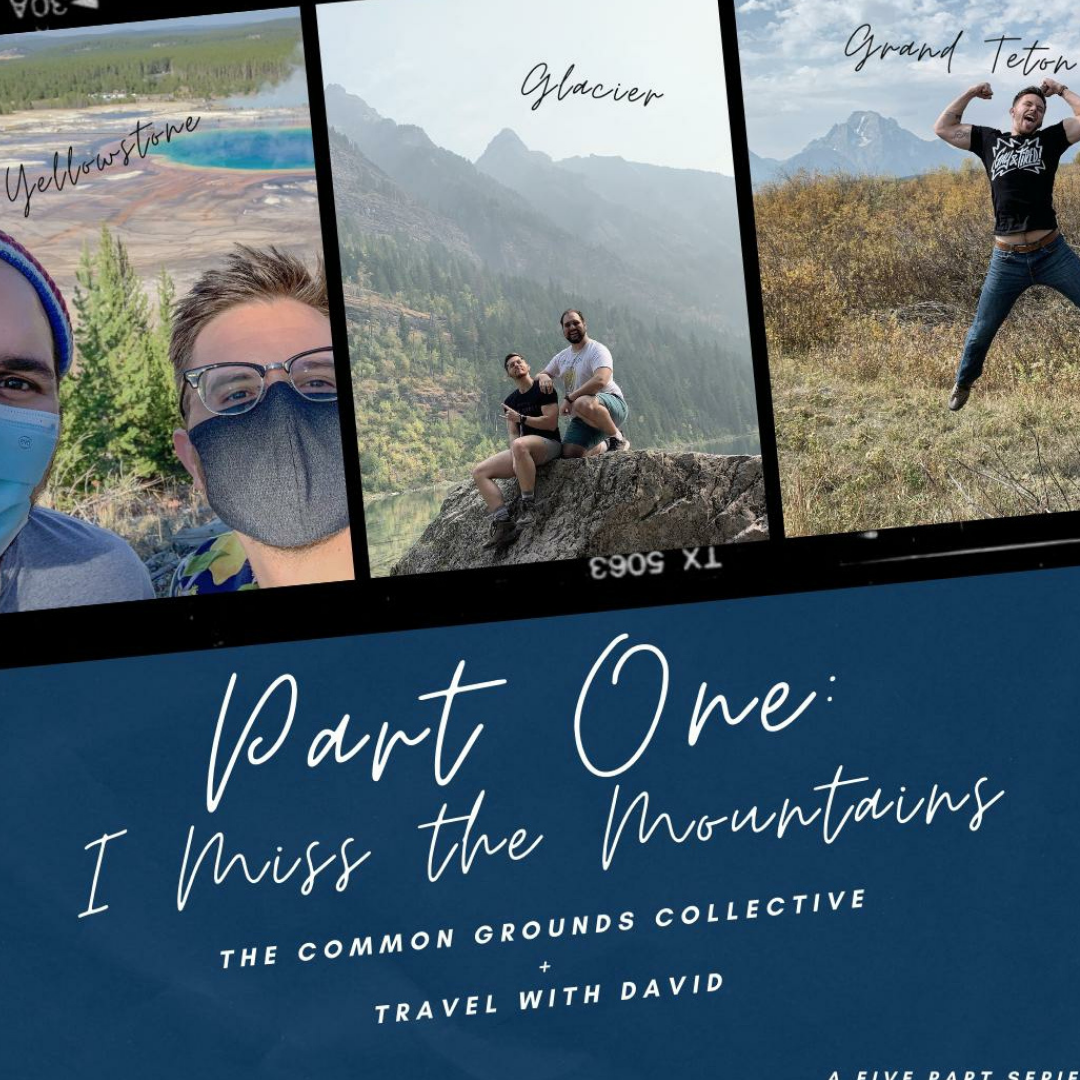 I Miss The Mountains: Glacier, Yellowstone And Grand Teton

Hey Guys, welcome to this new collaborative series between my good friend Barrett from The Common Grounds Collective and I. It is a fun project we thought up to branch out my blog with a unique topic and really to show different parts of the world. With this series, it will show off some of the US and its natural beauty and give tips to American Tourists and to foreign travelers for the future. I’m excited for you all to read this series and I hope it inspires you! ~ David

At the time we reached Montana, the air was still hazy with smoke drifting in from the wildfires to the west, burning steadily about 300+ miles away. What appeared to be morning fog never quite burned off with daylight, leaving hikers and sightseers to breathe it in as we climbed mountainous trails snaking around the bends and curves of Glacier National’s stone-faced beauty. My partner and I pulled into our hotel in Kalispell, Montana in the evening, intending to grab dinner and hit the bed early so we could be up before sunrise to start hiking. The Italian food in this small town in Montana was surprisingly good – but enough of that. We’ll talk more about Kalispell in another installment of this series.  The beginning of our Glacier adventure kicked off in Polebridge, Montana. Prior to setting off for the park, we popped into a REI in Kalispell and asked for recommendations from an employee there named Jason, who offered that we should drive up to this small town on the edge of Glacier National Park called Polebridge. Try a huckleberry bear claw, he said, and be on your way.

Polebridge Mercantile is the shop that sells the bear claws (and cookies, coffee, and a myriad of other fresh-baked goods). Founded in 1914, the mercantile is truly a great homey-feeling first step for the adventure. It was about 35°F (2°C) that morning; for me, a native of balmy Houston, their brewed coffee was a godsend.   After leaving Polebridge, we drove our trusty [rented] Subaru Outback southward to the Apgar Visitor Center, then northeast along the edge of Lake McDonald, past the Sperry Chalet, to the Hidden Lake Nature Trail. Just a light trail to kickstart our day after having our fill of bear claws and coffee. Hidden Lake took about six hours roundtrip, including the time we spent mingling and sightseeing at the lake itself (white haze notwithstanding). Let me tell ya – the view is well worth the hike. With crystal clear water, trees and mountainous cliffsides in all directions and a waterfall silently cascading in the far distance, you are in another dimension entirely. I am pretty solidly a full-on urbanite. I enjoy public transportation, walking to a corner store, the bustle, the smells, the people, the noise. Be that as it may, I have a healthy interest and respect for nature. Exploring this cavernous lakeside valley was as though I was inside of a painting. I was in a whole environment that I had never seen anything remotely close to before; so pristine and gorgeous that my mind had trouble processing it as real. That, my lovely readers, is Glacier National Park.  On another freezing morning, we found ourselves at Logan Pass to hike the Highline Loop Trail. I would love to tell you what this was like, but we were unable to finish it on account of a bear.   The Highline Loop is a narrow trail hugging the side of a steep mountain. There is nowhere to go off of the trail. So then, when there is a bear on the trail itself, hikers must, understandably, go back in order to avoid the bear. At 8AM, about an hour and a half into the trail, there must have been 100-150 hikers all making our way back to the trailhead, bear in tow. The excitement began when the hikers at the back of the line began screaming “Run!”   Reading the “Be Bear Aware” literature that one peruses before planning to hike at a national park teaches you to never run from a bear, but when the end of your single-file line of 100+ hikers screams for you to run, the herd of hikers does what they say, lest anyone be trampled – or mauled. About a mile and a half (2.4 km) of steady jogging later, we reached the trailhead in time to see park rangers entering the trail with tranquilizers.   How exciting!     Determined not to waste the day, we explored the shops and villages in the park instead. Take the time to do this. While they largely carry the same merchandise, they’re all just so freakin’ cute.

Post-Glacier, we found ourselves in Yellowstone National Park. Fun fact about this massive attraction: Established in 1872, Yellowstone is the world’s first national park.   More so than Glacier, Yellowstone is known for its resident wildlife. In fact, we pulled in through Mammoth Springs and right there in front of the hotel, post office, and cafes were just herds of wild elk with troops of friendly park rangers ensuring that no one got too close (they are, as I mentioned, totally wild). As tempting as it may be to pet the elk like horses in a stable, there is no stable and these elk will, how do the kids say? Fuck you up.

They’re cute though. Much of Yellowstone is visibly gorgeous, but olfactorily putrid. I’m not dogging on Yellowstone by any means; facts are just facts. With all of the hot springs covering much of the surface of the park, the smell of sulphur is ever-present. It’s stronger near the springs of course, but the scent remains faintly even when you’re passing through the expansive plains and valleys. Speaking of passing through the park: Drive carefully. This is not a controlled zoo; you are not on Disney’s safari ride. These animals are wild, remember, and that means they are free to roam wherever they want. Each day we spent at Yellowstone included a good traffic jam because of bison on the road. The payoff was a once in a lifetime treat, though – we had the unique experience of seeing the American Bison from what must have been no farther than a foot (0.3 m) from our car.

Grand Teton National Park was the final mountainous park we visited. Did you know its name means Big Boob? Okay, technically. Anyway, I’ve been fascinated by that for weeks because I’m a dumb American and I only speak English, so I had no idea what “grand teton” meant in both French (grand téton) and Spanish (teton/tetón grande). Turns out that French-Canadian explorers named the mountain “Grand Teton,” translating roughly to “big nipple,” “big boob,” or “big tit.” Bawdy, right?

I was especially enthralled because earlier this year on a road trip through the Southwest, I stopped and took a photo with Titty Top Mountain in West Texas. 2020 was the year of boobs for this gay boy, apparently. Grand Teton was more similar to Glacier in its appointments than it was to Yellowstone. Grand Teton is smaller than the two of them however. It’s cute and can be reasonably explored in a day or two. We spent our time in Grand Teton doing exactly what TLC told us not to do: Chasing waterfalls.   You can access Hidden Falls one of two ways: You can hike two miles around a lake to get to them or you can take a ferry across the lake for a nominal fee. Needing to try everything, we took the ferry there and hiked back. When you get to Hidden Falls, I suggest two things for ya: Hike from the dock to the falls and get as close as you want to. It’s beautiful. Get those selfies. When you’re done, don’t give up! There’s more to see! Before heading back to the dock or hiking back to the other side of the lake, hike upward. Inspiration Point is just up the hill and boy is it inspiring. The overlook at the top showcases not only the lake you just crossed, but all the mountains, valleys, and rivers ahead of you for miles. Get more selfies.

Another similarity between Glacier and Grand Teton is the A+ pull-outs. A cliffside pull-out found us face to face with a white-water rapid river. Another brought us to an impossibly beautiful lake with a family of moose wading through across the way. Really, take advantage of the pull-outs!

There’s so much more to the experiences of the days my partner and I spent at Glacier, Yellowstone, and Grand Teton. Thankfully, this is a five-part blog series! Stay tuned for Part Two, in which I’ll cover the things to see and do in the desert parks we visited: Dinosaur, Arches, and the Grand Canyon (plus a detour to Horseshoe Bend!) Then, keep reading as we circle back to Montana and Wyoming to talk about the places we stayed, ate, and grabbed coffee – and of course, when we address what the heck was up with all the huckleberry.   Until next time…

Barrett White is a journalist based in Houston. He runs The Common Grounds Collective blog, which he updates when he feels like it. His byline has appeared in the Houston Press, OutSmart Magazine, and Spectrum South – to name a few.​  He has lived the life of a starving writer in a 1930s downtown studio, enjoyed crepes on the banks of the Seine, camped in his Ford Focus while traversing the United States, and almost learned rudimentary algebra in college.   He’s exceptionally talented at navigating public transit and lives for the noise and the bustle of the city. ​His love of adventure and breadth of experience informs and directs his style.  Barrett is a proud Associate Member of the American Society of Journalists & Authors. You can find him on Instagram and Twitter at @ebearw.