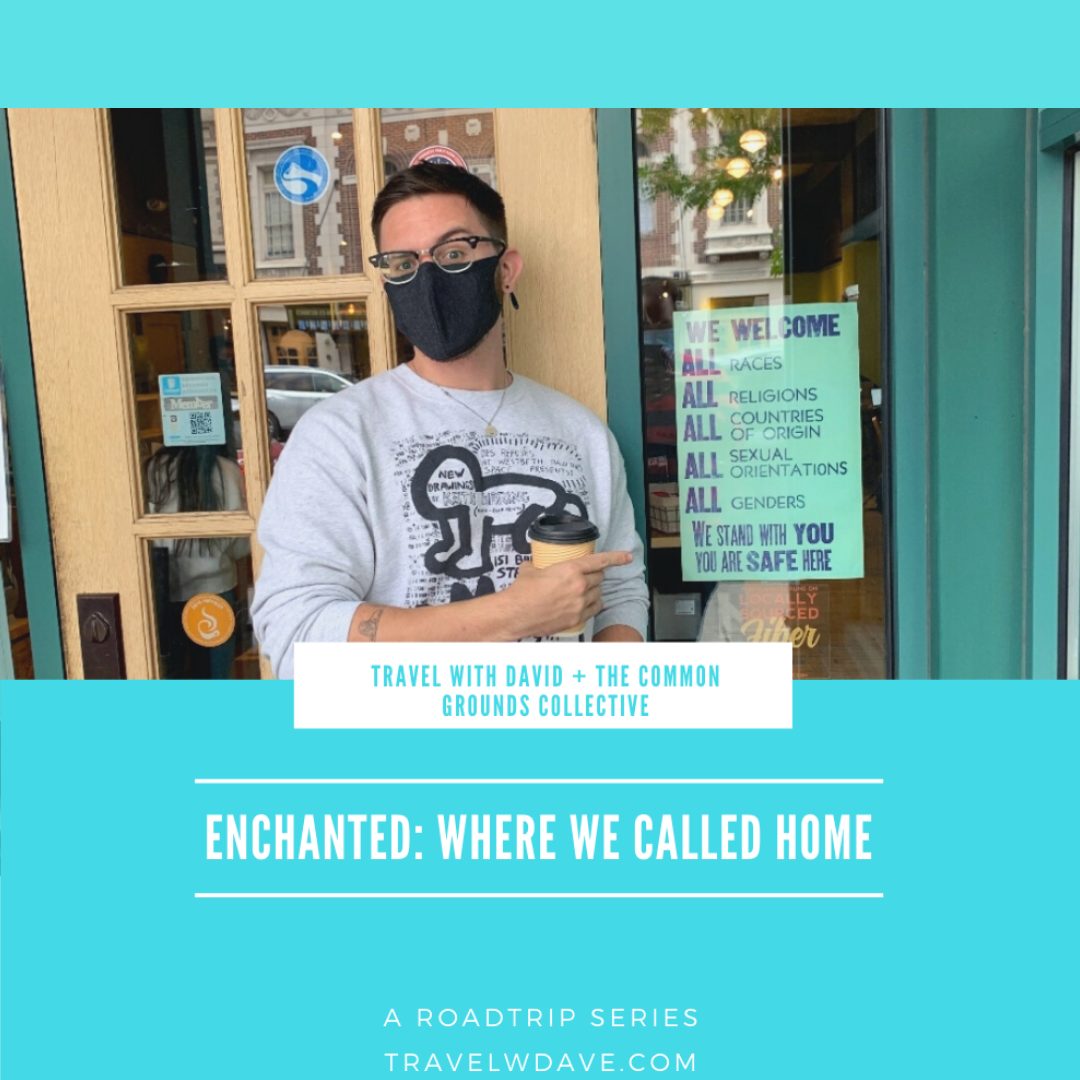 Enchanted: Where We Called Home

Hey Guys, welcome to Part 3 of this series! We’re so excited by the feedback and places this little fun Road Trip Story has reached! Barrett is a great writer and his work is awesome. We hope you enjoy this edition and we’d love you to stay tuned and check out the next installments!– David

I have to hand it to my partner. He really did find the best of the best for us on this trip. Okay, so Rock Springs was a little iffy, but we did have a “suite” that night. Let’s start with Kalispell, Montana. This town is absolutely the cutest. We stayed at a little Super 8, which was very proud to be located in Kalispell. It’s clear why, though – this town, though small, has big heart. I’m certain that much of its revenue must come from Glacier National tourism, and the locals know it. Everywhere we went, we were met with kind words and good food, and a town that knows its market (more on this in a moment).

We spent a few days there. This meant a few good dinners and one excellent dessert spot. Scottibelli’s Ristorante Italiano: My partner is Italian-Venezuelan (born and raised in Venezuela to an Italian family). I enjoyed the food myself, but it was his stamp of approval that I looked for. The stamp of approval was such that we dined there for dinner twice, which is a rarity for me as a person who wants to try all the local spots; I rarely eat in the same place twice when I’m on vacation. Blue Samurai Sushi Bar and Grill: I’ll be honest. We were nervous to try Montanan sushi. Thankfully, we were more than pleasantly surprised. We had a mixed order of sushi and fried rice, which made for perfect cuddle-weather food while we caught up on some Netflix dramas back at the hotel. Sweet Peaks Ice Cream: This little gas-station-turned-ice-cream-shop was rad, y’all. The array of flavors was diverse and eclectic. It was, as I joked on Instagram, the only time I’ve ever said “I’d like scat, please.” The flavor was called “bear scat” and was a chocolate base with chocolate chips and blueberries. Tongue-in-cheek ice cream names and good humored employees really brought it together for me. Kalispell itself was well equipped for Glacier National tourism, too. There’s an REI right off the main drag, a Costco nearby, and a Target, too (which is where we were when news broke of the death of Justice Ruth Bader Ginsburg). Quick aside, as we returned to the hotel after Justice Ginsgurg’s passing, a small vigil had appeared at the county courthouse in the center of Kalispell. In attendance were perhaps 10-12 people donning Justice cloaks, carrying rainbow flags, and holding signs reflecting messages of causes that Justice Ginsbug fought for. Most interesting about the town is that when you leave for Glacier National in the early morning hours, the town is prepared for your journey. The main drag through town (South Main Street) is a direct route to the highway that takes you to the park. Therefore, all of the stoplights down South Main favor tourists in the early hours when most folks are heading that way. All of the lights during these high tourist traffic hours flash yellow, suggesting that tourists watch for crossing vehicles, but all cross streets flash red, telling motorists attempting to cross South Main to yield to tourists heading for Glacier. Honestly, that’s genius. We only spent one night in Silver Gate, Montana. Hoo-boy, it was worth it, though. We were booked at the Grizzly Lodge, just outside Yellowstone National Park. The lodging operates mostly like a motel, but there are cabins on site as well, which we were lucky enough to have booked. We arrived late in the evening, but check-in was quick and painless. Unfortunately there was no signal (I have AT&T and my partner has Sprint) and the WiFi didn’t reach our cabin. As workaholics, that had us stressed a little bit, but honestly it was good to be forced to unplug. The crown jewel of the experience was not the lodge itself, or the town for that matter. It was the sky. It was about midnight or so when we were finally getting ready to head into our cabin for bed. Before heading inside, we sat at the fire – nearly burnt out, just glowing red – staring up at the stars. As urbanites, we rarely see the sky without light pollution. In fact, we only do if we’re out of town somewhere. In the woods of Montana, light pollution doesn’t exist. Enjoying the soft glow and warmth from the dying fire, we pretended we knew what constellations were, gazing at the sky and only capable of pointing out the Big and Little Dippers. It was as though a child had spilled all their silver glitter onto black construction paper. Across the black expanse of the universe above was the silver-blue stripe I’d only ever seen in movies, but never in person. We had another one-night sleepover the following night, this time on the other side of the national park in West Yellowstone, Wyoming. Keeping with the bear motif, we stayed at Three Bear Lodge on Yellowstone Avenue, an adorable picturesque thoroughfare.

The pizza we ate was just fine, but it was the town itself that I relished in. A little tourist-y, but uniquely Montana all the same. There were lots of people walking about, even late at night. All wearing masks, thankfully, but still surprising to see. We were walking in such a small town, but it was as though I was back in Manhattan in some areas. The last thing I’ll say about West Yellowstone is that they do not play with their breakfast burritos. And that’s coming from a Texan. I was surprised to see breakfast burritos on the menu at Three Bears’ attached restaurant, and assumed they would be more like tacos. No ma’am. This beast came out looking like Chipotle. Touche, Wyoming. The following night, we found ourselves in Rock Springs, Wyoming. I won’t spend much time on Rock Springs because there’s not much to say. I’m sure the town is nice, but we didn’t see much of it. We did, however, stay at a small hotel where we arrived to a dirty room. When we informed the front desk that our room hadn’t been cleaned, the [very friendly] staff upgraded us to a suite with a bed, living room, and bathroom. It was no Waldorf-Astoria, but it was cozy and the sentiment was more than appreciated, stained carpet and all. We had traveled pretty far south by the time we hit Moab, Utah. We stayed here while touring Arches National, and much like Kalispell above, Moab knows the tourist market. We slept at the Moab Valley Inn, which was a mid-level hotel with perfectly nice appointments like a small gym, a pool, and hot tub. Across a small alley drive was the Blu Pig, which we were given coupons to upon arrival at the Inn. Guess dinner’s settled, then! Food at the Blu Pig was terrific and filling, and again, that’s coming from a Texan (it is a BBQ joint, after all).

The following night, we got a little more adventurous in Moab. We explored the town, taking in the sights. Shops all along the downtown area with orange mountains in the distance. It’s a beautiful spot. We grabbed dinner that night at a vegan food truck called Moab Kitchen. Look, getting there, especially after sundown, is a little creepy. But I swear the food is good. From what I can infer from the business, though it’s a food truck it appears to stay in the same spot. While we were exploring the town, we parked on US Highway 191 (essentially Moab’s Main Street). Moab Kitchen is located a few blocks down Center Street to the east. As you walk down Center, you’ll notice fewer and fewer lights (and people) on the street, but have no fear: Moab Kitchen is there. Another food truck in Moab we hit up was Quesadilla Mobilla. These quesadillas were huge, stuffed, delicious, and the staff played no games with anti-maskers. While we waited in our socially distanced line, we witnessed one anti-mask gentleman get turned away as soon as he stepped up to the back of the line. Thanks, Quesadilla Mobilla! Definitely made me feel a bit safer to know that they’re adhering to safety precautions. Thanks for reading along. As I wrap up this list, I have to say that this last town is pretty special in my heart. I have to say that of all the towns we visited, it was Flagstaff, Arizona and Kalispell, Montana that I enjoyed the most (of course, I loved all our spots). My partner and I both were genuinely surprised by how beautiful Little America Hotel was. It was listed as three-star and under $100 (€85) per night, but the building was actually much closer to a four- or 4.5-star hotel, to be honest. I wish I had taken more photos! From the outside, it almost looks like a complex of apartment homes. Inside, the building is full of contemporary glamor, and is immaculately clean. There’s an on-site restaurant and a large pool with attached hot tub. Dare I say it felt… luxurious? Flagstaff itself was gorgeous, too. Why does no one talk about Flagstaff? We spent one full night just exploring the downtown area (including a stretch of the famous Route 66). If there’s one thing I must recommend, it’s pizza from NiMarco’s (and yes, it got my partner’s stamp of approval, too).

While there, we even witnessed a Black Lives Matter march – surprising, considering Arizona’s conservative slant; then again, plenty of people assume such things about Texas, too, and yet we all know that’s not the full story on Texas, either, as I recently wrote for a regional publication. I picked up some local art and called it a day before heading back to the hotel. There are only two installments left! Thanks for reading along. I would love to know if you plan on making a trip to one of these parks and if these blogs have helped you plan in some way. Contact us and let us know!

Barrett White is a journalist based in Houston. He runs The Common Grounds Collective blog, which he updates when he feels like it. His byline has appeared in the Houston Press, OutSmart Magazine, and Spectrum South – to name a few.​ He has lived the life of a starving writer in a 1930s downtown studio, enjoyed crepes on the banks of the Seine, camped in his Ford Focus while traversing the United States, and almost learned rudimentary algebra in college. He’s exceptionally talented at navigating public transit and lives for the noise and the bustle of the city. ​His love of adventure and breadth of experience informs and directs his style. Barrett is a proud Associate Member of the American Society of Journalists & Authors. You can find him on Instagram and Twitter at @ebearw.