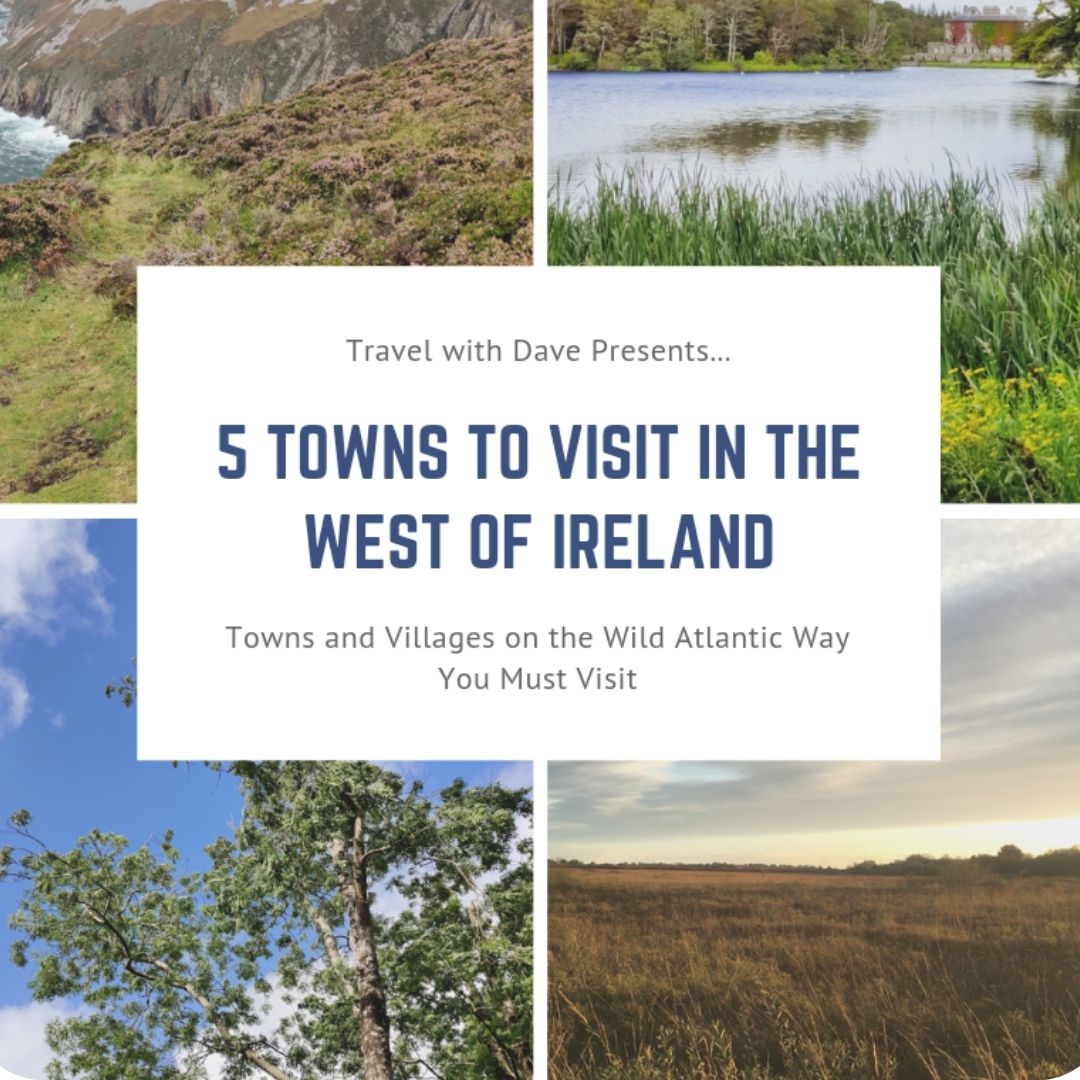 5 Towns To Visit In The West Of Ireland

With Staycationing in full swing now and with people taking up more interest in discovering their own areas and countries, it can be useful to have an idea of where to go and what to do. Ireland’s West Coast is probably one of the most unique coastlines I’ve ever experienced (so far). The towns and villages dotted on the coastline are some of the most scenic places with the nicest food and the coolest beaches. This is a list of 5 Towns and Villages I have visited on the West Coast that I think are worth visiting, and I have been to a fair few so it was hard to narrow it down to 5. This list can be useful for anyone in Ireland looking to explore the Atlantic Coast and also for anyone who is visiting Ireland in the future and wish to experience the true Ireland! Enjoy!

Starting off strong on this list, with County Donegal. Donegal is such a cool county. The people there are some of the funnest and nicest people you’ll come across. Donegal has some pretty great places to go and spend a weekend, like Letterkenny, Buncrana and near Derry. Bundoran, however, is a great coastal town. The town is a popular seaside resort, and tourism has been at the heart of the local economy since the 18th century. Bundoran is a world-renowned surfing area and was listed by National Geographic magazine in 2012 as one of the World’s Top 20 Surf Towns. Bundoran is a great adventure town. My experience in this town was a few years ago as part of my Adventure Tourism class in college. Donegal Adventure Centre is based in Bundoran and plays host to a range of activites like Surfing, Team Building and Rock Climbing, it is actually such a fun place. Bundoran is such a vibrant place to visit and has a very nice music scene as well as places for entertainment like casinos. The Allington Arms in Bundoran is a great place for food and to stay, right by the waterfront is a perfect stop for anyone going to spend a night! So, for anyone looking to start a trip along the Wild Atlantic Way, make sure to check out this amazing spot!

Achill Sound And Achill Island is an infamous part of Ireland’s West Coast and anyone who lives in Connacht has at one point visited Achill. Achill Island is the largest of the Irish isles off the coast. Situated in County Mayo, an incredibly scenic county itself, Achill has a population of around 2,700 people and is connected to the mainland by the Michael Davitt Bridge and is certainly one of a kind in terms of island/coastal areas. As well as beaches, which are some of the nicest beaches in Ireland, Achill has some incredible places of interest. For example, the Kildownet Castle (relating to famed Irish leader, Grainne Mhaol) as well as the Croaghaun Cliffs which are the third highest sea cliffs in Europe. Achill Island is a great place to go for a numerous reasons, for history, relaxation by the ocean as well as for those who wish to engage in hiking and hillwalking. A lot of activities can be done in Achill like Surfing, Heritage Tours and Aquarium Visits. Some of the best views out to the ocean exist here and it truly stunning! The Amethyst Bar in Achill is a great place to stop for food in the area. When you’re not out catching a wave or checking out the local walking trails, go grab a bite here! Definitely worth checking out when you’re planning a trip to the Yew County!

Clifden is a coastal town in County Galway, Ireland, in the region of Connemara, located on the Owenglin River where it flows into Clifden Bay. As the largest town in the region, it is often referred to as “the Capital of Connemara”. Galway County has some of the most rugged and beautiful landscapes and coasts in all of Ireland and this is evident in Clifden. “Whatever your taste in a holiday, whether it’s a relaxing retreat or an action packed activity holiday, Clifden is an ideal spot to base yourself while exploring the region. Families will enjoy visiting the many sandy beaches in the area and swimming in the crystal clear sea, or participating in the many adventure activities available locally. Couples, young or old will enjoy the beautiful walks in the area and relax afterwards with a Guinness or two in the many pubs. Although Clifden can be very popular, particularly in the summer months, there is always a relaxed atmosphere” – About Clifden Clifden is in an amazing location. About 50 miles from Galway City and near some of Galways rural landmarks like Kylemore Abbey, Ashford Castle and amazing natural beauty like the Twelve Bens! Not only that but it’s a hub of culture too! So it is safe to say that Clifden has a lot to offer anyone wanting to visit! Be sure to add it to your itinerary

Kinvara, also referred to as “The Head of the Sea” is the only prominent sea village on the southern shores of Galway. Kinvara also acts as the Gateway to the Burren, Europe’s largest Karst Landscape and onwards to the Cliffs of Moher. It is one of the bigger towns laying on the Galway/Clare Border. As most blogs and reviews state, Kinvara has been described as a small fishing village with a big drinking problem, meaning Kinvara people like to have fun and drink. For a small sea village, Kinvara has plenty of places to relax and enjoy the character of the town as well as the local food and beverages. One of Kinvara hotels (Merriman) has the biggest thatch roofs in Ireland, The Pier Head beside Kinvara’s pier and Keoghs pub all lend Kinvara character. The town of Kinvara has all you need for a weekend out like pubs, hotels, b&b, launderette, shops and a bicycle shop to rent a bicycle. Besides it being a bustling sea village with sea avtivites, Kinvara also has a number of landmarks. Most prominent on your entry into Kinvara is Dunguaire Castle. Dunguaire Castle guards this end of the bay, and is one of the most popular tourist spots in County Galway. Kinvara’s Dunguaire Castle is one of the most picture-perfect castles in the West of Ireland and, with the added appeal of its waterside setting, it is also one of the most photogenic. As well as landmarks around the village, if you’re planning a trip to Kinvara, check out the nearest beach, Traught Beach. It’s a quaint beach with sand, stone and grass, perfect for relaxing. It is a must-stop place along the coast. It is so chill, even for an afternoon. The Pier Head offers a really delicious menu as well as outdoor dining which, on a warm day, is just what you need!

Number one on this list is Doolin! Doolin is a coastal town in County Clare. Situated on the Wild Atlantic Way, boasting some of the most breathtaking scenery in Ireland and with a colourful and welcoming village ready to host you during your stay, Doolin has something for everyone including fresh food, scenic views and nature. Located on the edge of the historic Burren in northwest County Clare, and within easy reach of the majestic Cliffs of Moher and the unique Aran Islands, Doolin’s dramatic landscape cannot easily be forgotten. “Doolin is the home of traditional Irish music, with plenty of music and entertainment. You can take a clifftop walk breathing in the crisp, salty Atlantic air while appreciating the beautiful wildflowers, discover the great stalactite at Doolin Cave, explore the rugged landscape or go on an Atlantic cruise to appreciate the unique coastline from a different perspective. Adventure is waiting for you in Doolin” – Doolin Tourism Doolin is a vibrant place full of characters, stories and experiences and is home to some of the region’s best accommodation, eateries and beautiful local shops. I love Doolin. It has some great views. Great people. And honestly, the food that comes from that region is one of a kind. St. Tola Cheese. Burren Smokehouse Salmon. The produce from the area is quite amazing and fresh! With some of the most stunning and just one of a kind views and natural landscapes, it is a must visit whether for a staycation or for a trip to Ireland! Definitely come check it out

This is just a list of some of the coastal towns and villages I’ve visited in Ireland along the west coast that I recommend if you want to take a staycation or when things go back to normal, for you to take an Irish trip! Let me know what you think and leave some comments on some places in Ireland you would recommend!