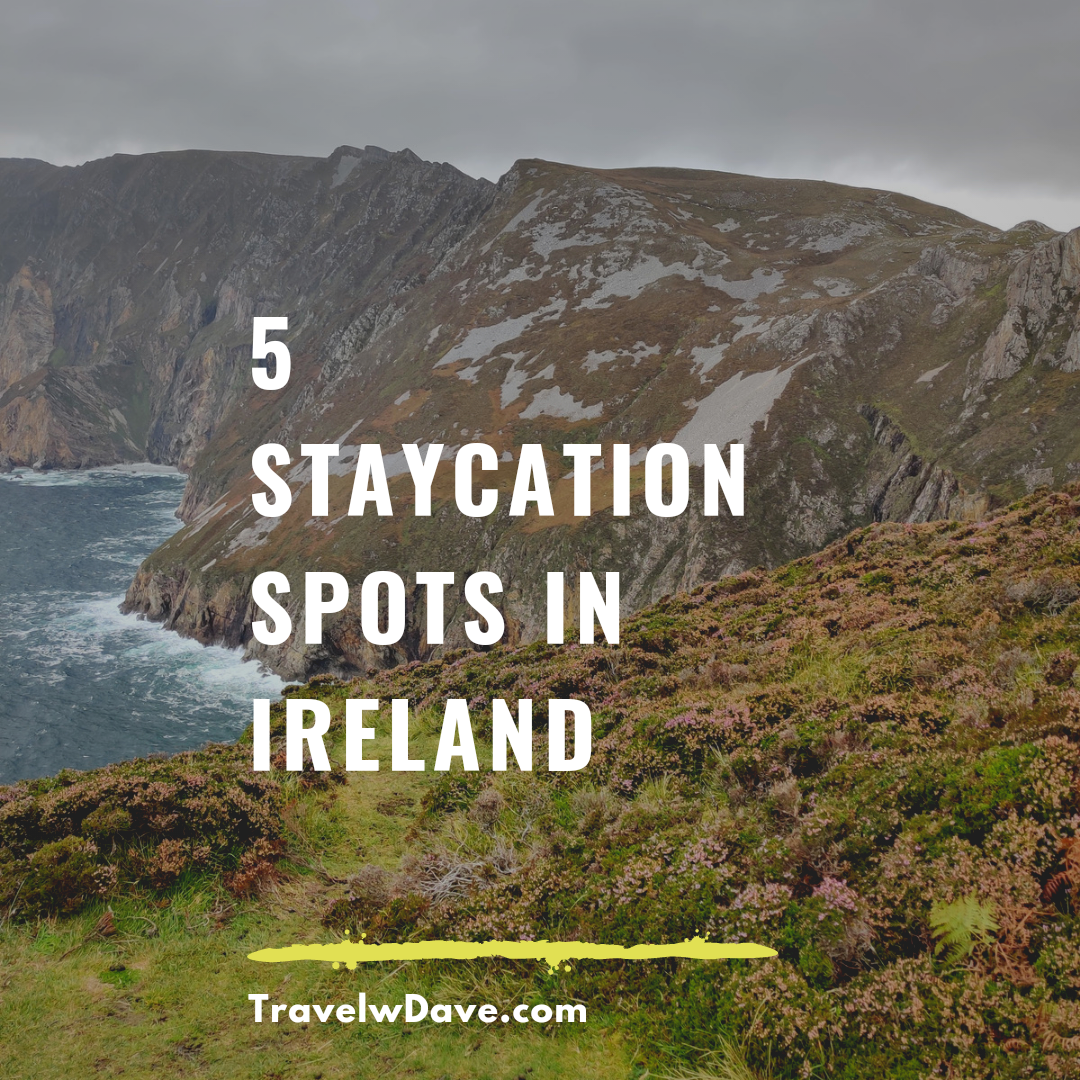 If there is one thing that unites people in these weird lockdown times, it’s the feeling we have now that Covid has dashed our summer plans. How selfish of it, honestly. Luckily though, some countries and cities are starting to reopen and allow people to come visit!   Most countries and tourism agencies are strongly advocating for people to stay within their own country and indulge in the attractions and offerings at their doorstep! Places like Italy are offering incentives and others offer a subsidy for their citizens to explore their regions and areas before considering traveling abroad. Watch this space though. ‘Staycation’ may be the new trend in travel! This may be biased but Ireland is one of those locations that has so much to offer in each county, whether it be history, culture or seaside getaway, it makes it a perfect country for it’s citizens to explore. Like I said, total bias hah! Below is a list of the 5 Staycation Destinations in Ireland that I’d recommend visiting in 2020! Allow this list to help you plan your next Irish trip or weekend away!

Starting off this list strong with a coastal town in the North West. Ireland’s North West is a rugged region on the island that offer incomparable coastal views, Along this coast line lies Enniscrone, A small seaside town in County Sligo. Enniscrone’s sandy beach is a landmark of summer trips for Irish people in the west. Nothing could beat a day by the beach, soft serve ice-cream and sunshine in this cute cove! Like most landmarks on the Wild Atlantic Way, there is a lot of things to do in Enniscrone and the surrounding area, “Embrace the great outdoors with superb natural amenities and experience spectacular views of coast and land”. Surfing in the Atlantic, trekking around some of the nearby hills for some natural beauty and scenery or perhaps some horse-riding, Enniscrone offers a bit of something for everyone. Families can enjoy the incredible blue flag beach, couples can take a seaweed bath at Kilcullen’s… This is all without mentioning the food and drinks to be had in Enniscrone! The Pilot Bar in Enniscrone offers real tasty pints and an even tastier menu!   Enniscrone is a short drive away from Ballina, Co. Mayo and neighboring Sligo towns and villages like Easky. It is certainly a must-visit area for those looking for a coastal Staycation! Check out the Diamond Coast Hotel and the Ocean Sands Hotel in Enniscrone as they reopen on the 29th of June! Support the hotel sector on your stay!

I adore Kilkenny County. It’s one of those places in Ireland that feels rustic and like, truly Irish. Having some family that hails from Kilkenny, my family trek down every now and again. During my last visit to Kilkenny, it struck me just how picturesque Ireland is as a country and even though it is small, it really shows just how much history and culture there is in even the remotest of areas. Kilkenny City is no exception to this. Built along the banks of the River Nore, Kilkenny City is a gem of Ireland’s South-East Region. Situated on Ireland’s Ancient East, Kilkenny is a hub of culture and history. The various iconic landmarks that lie in Kilkenny showcase the length and depth of its links to the past. The various churches and religious buildings like the Dominican Black Abbey and St. Mary’s Cathedral show the historical religious aspect of the city as well as provide for really cool photo ops! I’d be crazy to write about the Marble City without mentioning the most notable landmark in the center, Kilkenny Castle! Situated on the “Medieval Mile”, as part of a culture trail, this 12th Century castle links to many historical times in Irish history including Norman Occupation and Cromwellian Conquests. It also houses so pretty amazing art!   Kilkenny City is a wonderful location for any tourist looking to delve into Ireland’s past and is ideal for a Staycation! With hotels opening on June 29th, check out hotels such as the Pembroke Hotel and the Kilford Arms Hotel in Kilkenny City Center for accommodation! Support the hotel sector on your stay!

Cobh, on Ireland’s southern coast and formerly known as Queenstown, is a tourist seaport in Cork Harbour. Most tourism in this area stems from Cobh’s history with immigration and maritime links like its ties with the Titanic, being one of its stops on her maiden voyage. The neat thing is that Cobh remains largely untouched since the Titanic docked here, so people when they visit the harbour town they can see things as they would have been seen in 1912. Cobh has a history of being a key naval base for the British and US armies in the First World War until Ireland became a free state and the bases handed back to the Irish in 1938. Cobh, similar to Kilkenny, is a unique and historic place in Ireland. As well as these significant history pieces, tourists can avail of tours to the neighboring Spike Island, which is said to be really cool, Tourists who are to visit here are amazed by its coastal beauty and views. It truly is a unique place to visit, if you’re looking for an experiential experience on your Staycation and would be an amazing place for future tourists to Ireland to discover. Not only that but Cobh is said to have really good seafood…   I think Cobh would be a cool place for a getaway style Staycation as it is on the coast and provides so much access to history. If you’re planning to visit Cobh, check out the local accommodation offerings like the Commodore Hotel or the WatersEdge Hotel for great coastal places to stay!

Situated on the edge of the Ring of Kerry on Ireland’s south western region is Killarney, County Kerry. On the northeastern shore of Kerry’s Lough Leane, Killarney is a really picturesque part of Ireland and a gem of Ireland’s south western region. A mix of traditional and natural beauty is what makes Killarney. Killarney is home to a lot of really cool attractions like Muckross House, Killarney National Park and The Black Valley, a really neat valley near the MacGillycuddy Reeks Mountain Range. Killarney, which I visited when I was younger, is a really cool part of Ireland. You can do so many cool things. Take a horse and cart around to Muckross House. Check out the lake, The National Park is really nice! A way to explore nature and take in the natural scenery. It’s quite amazing. I would recommend a trip to the South West of Ireland. It can have really nice weather. Real nice sea breezes and just relaxing surroundings. I’d say if you’re looking for a real nice and tranquil time away, Killarney is the place! They have some real nice B&Bs there and some comfy accommodation too! Make sure to check them out!

As if Galway wasn’t going to be number one hah! Galway, if you’ve never heard of it (Galway Girl by Ed Sheeran anyone?) is an amazing part of Ireland to visit! A mix of city and the coast all in one. Galway City lies in the West of Ireland and is on the edge of the Atlantic Ocean, I love Galway. Galway has so many things for those wishing for a cool getaway in Ireland. The beaches in Galway are perfect for relaxtion, there are cool landmarks like the Spanish Arch, St. Nicolas’ Church and Galway Cathedral. One thing that makes Galway quite amazing is the food offering and the proximity in which you can get this awesome food, Seafood from McDonagh’s in the Latin Quarter, Ice Cream from Murphy’s or even really awesome coffee and treats from Cafe Temple. The vibe of Galway and its really cool offering of activities, scenery and restaurants make it an amazing place for a cute little getaway or a weekend trip! Having grown up in Galway, I just love it. Going through the streets. Relaxing out in Salthill or just relaxing in Eyre Square can be really nice. Obviously with the virus, the city will be a bit quieter than usual but Galway’s stores will open up as will the hotels and restaurants. I think for a real nice weekend away for a Staycation, Galway is a really good destination to check out! Galway has a hugh offering of accommodation like Jury’s Inn, the Imperial Hotel and the Galway Bay Hotel to name a few. Definitely check out the City of Tribes for your next trip! (P.S Stay tuned for my upcoming blog on Galway!!)

I wanna hear from you! Do you have any places where you’re from that you recommend visiting? Any places in Ireland you want to visit? I’d love to see your suggestions!