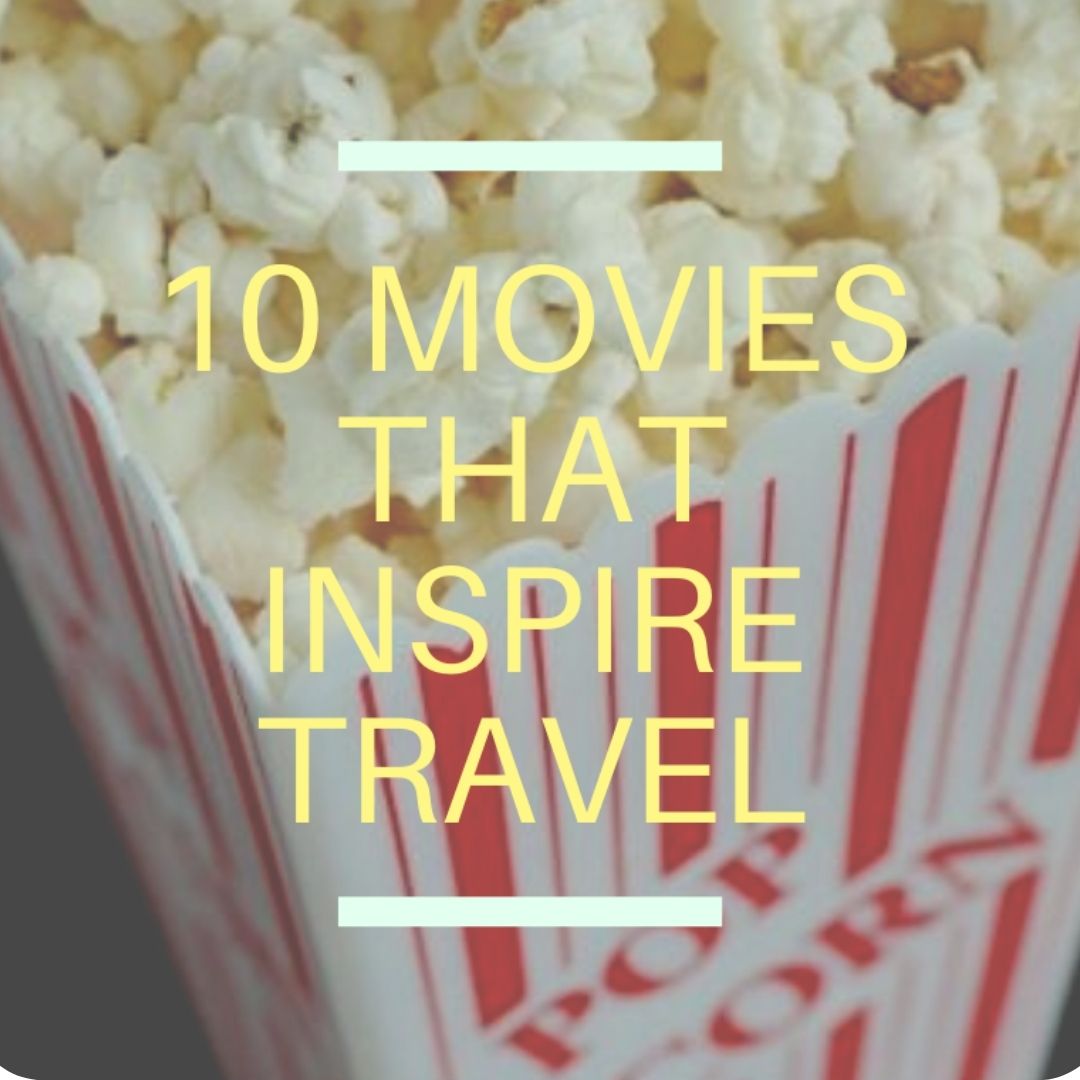 10 Movies That Inspire You To Travel

It’s almost June, 2020. For most of us, this would be the start of out summer vacations! A couple beach trips planned or a Mediterranean holiday on the horizon or perhaps a plan to traipse across a continent. Alas, for those of us who had some travel plans for the summer, it’s sad times that for the foreseeable, our trips have been postponed due to this darned pandemic. However, for those of you, like me who just love to travel and can’t really function without having some kind of getaway planned! With news coming from different parts of the world (Some of which you can find on the “Tourism News” section of this site), a few destinations are kicking their tourism season into gear once again with some Caribbean Islands testing the waters with reopening and places like Italy doing more to internally boost their tourism, it won’t be too long before we’re back planning and jetting off around the world!   While in lock down though, it can be fun to keep your hunger for travel sustained and to appease your travel bug by watching some inspirational and motivational movies that can spark ideas about your next trip! Below is a list of the 10 Movies I think can inspire anyone to travel and really do well at showcasing awesome locations!

A romantic-thriller movie starring the incredible Johnny Depp and Angelina Jolie and is a remake of a 2005 French film, Anthony Zimmer. Described as a “Travel romance with thriller elements”, I recall watching this movie a handful of times, not just due to the great quality of the movie but because the movie was shot in some really amazing locations like Paris and Venice, two of Europe’s most iconic destinations. The movie includes some really picture grabbing scenes throughout mostly Venice that would really inspire anyone to want to go there. Not to mention, a movie with Angelina Jolie is set to be a great one, and I’d hope you guys would agree with me! Most high action Jolie movies contain some pretty great locations, in general but this one is for sure a stand out!

One of the most iconic film franchises of all time with huge cult followings. The first film in the franchise, Raiders of the Lost Ark was released in 1981 with the latest film, Kingdom of the Crystal Skull being released in 2008, and another set to be released in 2022! You know the the franchise was gonna be a great success with both George Lucas AND Steven Spielberg working together on the movies with Spielberg calling the franchise a “James Bond film without the hardware”. The thing about Indiana Jones is that his adventures took the viewers to awesome locations. Egypt, India, scenes filmed in Hawaii, Sri Lanka, Tunisia, Germany and Spain. Their location budgetary expenses were well spent on their photography and filming and how the movies inevitably turned out. All these locations served as great postcards for the locations they were shot in and the fictional locations they represented! A lot of these places and destinations come with their own style of adventure, so I for one would love to go and discover a few of these filming sites, especially the exotic ones!

Arguably, but definitely in my opinion, one of the loveliest animated movies of all time. Now many will see this listing and think “How can this animated movie inspire anyone to travel?” and you’d be right to ask that because, realistically, you’re not gonna find yourself flying around the world in a balloon-lifting house (Imagine though). One quote that I love about travel though, and this is my response to that question, “Travel is about the journey, not the destination”. Throughout this film, we see the characters take an emotional AND physical journey. The main character and his boy scout sidekick (As well as some HILARIOUS side characters) take a journey in a floating house to see the wiles of South America. If you guys find yourself feeling the quarantine blues, definitely go and check out this movie. It is just SO good and may inspire some travelers to embark on a trip to South America or perhaps seek out some hot air balloon adventures!

I have never wanted to party harder with a group of people more than the guys from The Hangover! These movies show the severity of just having too much fun but I guess the phrase “When in Vegas…” is appropriate for these movies. Hungover as hell in each movie, the guys, consisting of Bradley Cooper, Ed Helms and Zack Galifianakis. Retracing their steps through the strip of Las Vegas or shuffling through Bangkok with absolute carnage following them throughout, the movies are just filled with hilarious jokes and funny moments that just make you kind of wanna have a night like that somewhere in the world! Although it is fictional (I can’t imagine taking Mike Tyson’s tiger, can you?), traveling places to party can be just so fun!

Amélie is a movie I came across whilst studying French in school. The movie stars Audrey Tautou as a shy waitress named Amélie who decides to change the lives of those around her. The movie has some romance and comedy throughout but the most striking part about the movie is the visuals of Paris throughout. Since studying French, I’ve wanted to discover and spend time in France and immerse in French culture and this movie was and is a fun way to somewhat discover France’s capital city! For those who also love French and want to enjoy some good French film, I recommend giving this movie a watch!

I’d safely say that 90% of the Ben Stiller movies I’ve watched over the years have been feel-good, easy watch movies that are movies you’d happily watch again and again. Some of my favourites include: Dodgeball, Along Came Polly, The Watch and The Night at the Museum franchise. His movie, the Secret Life of Walter Mitty, about a negative assets manager who goes on an adventure through Greenland and Iceland to find a photographer (Sean Penn). This leads him to flying in a helicopter with a drunk pilot, near a volcano erupting and visiting the Himalayas. So much adventure and comedic moments comes from this movie and would definitely convince you to wanna visit Icekand, Greenland or the Himalayas!

There is never enough that can be said about Meryl Streep and you all know that any movie with her in it is a MUST WATCH. Winning Best Picture at the 58th Academy Awards and Streep’s 6th Oscar Nomination, Out of Africa is a wonderful romantic drama about Karen Blixen (Streep) recalling her life in Africa in 1913, based primarily in Nairobi. It shows her dealing with her husbands decisions and the life she leads in Africa as well as turmoil from the first World War. To be honest, it’s a very gripping watch. In saying that, the film was shot throughout Nairobi and really shows off the beauty that lies in Africa. Especially in areas like the Great Rift Valley! For those needing a dose of drama whilst immersed in African surroundings, this is an incredible movie to watch.

For those of us who grew up watching the Disney Channel in the early 2000’s would be familiar with the iconic tv show, Lizzie McGuire. The story of a teenager navigating her way through the social and personal issues of teenage life, just comedic and with an animated version of herself for cutaway segments that are hilarious also. The show became a staple of daytime tv for kids growing up in the noughties and the show catapulted Hilary Duff into Disney royalty. In 2003 however, the world (Well, those who were “coming-of-age” or just loved Disney) was just recovering from the Princess Diaries film (And who still doesn’t wanna visit Genovia, eh?), was gifted with the Lizzie McGuire Movie! The movie follows Lizzie as her class takes a school trip to Rome (Lucky…). On this trip she gets mistaken for a global superstar , gets to tour the incredible city and gets to perform in front of a tonne of people at the Italian Grammys, basically. Now tell me what child doesn’t want to travel to Italy after that! The movie highlights some of Rome’s incredible landmarks and really showcases the city, which just makes anyone want to visit!

What can I say about this movie that hasn’t already been said? How this movie didn’t sweep every Oscar the year it was nominated, I’ll never know. This movie is beautiful. It’s emotional. It’s heart-melting but also heartbreaking. To be honest about this movie because I was made aware about a particular… peach incident but a 2 hour flight from Madrid was the perfect place (I guess) to sit back and watch this movie. The movie, set in Italy in the 1980’s shows the relationship between a guy and his fathers graduate assistant. The relationship is passionate and romantic and just makes the viewers feel something. The great thing about this movie though is that it is filmed in rural Italy and places like Bergamo and Pandino and just show the viewers how beautiful and rustic the Italian countryside and the inner areas, small towns and communes can be. It definitely, one hundred percent, made me wanna go back and spend a lot of time in the country.

This just gets number one and is definitely going to be biased. Ireland can never be cast on screen too much. The striking landscape kind of tells its own story and the mythology and history behind Ireland kind of makes any movie… more. I was stuck between these two, P.S I Love You and The Quiet Man, as these movies as they play different roles in projecting Ireland to the masses. Starting with P.S I Love You, this movie just leaves you in floods of tears. And it can’t be helped. Bereavement is felt by everyone at some point, and it makes the movie so relatable. Hilary Swank, accompanied by a great cast (Lisa Kudrow, Gerard Butler, Kathy Bates), plays a grieving wife who, with her friends, travel to Ireland to visit her husbands homeland. Filmed in County Wicklow, the film shows Ireland in such a positive light behind the somewhat sad storyline of the movie as it progresses. And if having Matt Damon in Ireland for 3 months during Covid says anything, it’s that Ireland loves hosting Hollywood sometimes! The Quiet Man is a different kettle of fish, it follows Sean Thornton (John Wayne) who travels to Ireland to purchase a family farm and falls in love with a local girl (Maureen O’Hara). This film is a classic and shows rural Ireland in a historic light. The cinematography was so good it ended up winning the Academy Award in 1952. This movie was filmed in counties Galway and Mayo with landmarks from the movie still existing, like the Ballyglunin Railway Station. As well as depicting old, Rural Ireland, it is also one of a few Hollywood movies to feature the Irish language and has since been placed in preservation by the Library of Congress for it’s cultural representations! A long winded statement but again, this pick may be a bit biased! These movies are great for those wishing to see some of what Ireland has to offer though, so I’d personally recommend them!

Let me know what you guys think and leave a comment about movies that inspire you to travel! There are some great ones out there! Be sure to follow and stay tuned for more.